My house burned down and my boyfriend shook his head and left. Not too many choices, rather forced, to move to the studio, the ice palace. I was twenty.
On the bright side I was living, rent-free.
As for the negative, the building’s pipes burst and water had cascaded over the front of the building, sealing shut my entry. No key could penetrate this fortress and I began to resent the fact I was locked in or out at five o’clock when the business next door closed.
Standing in a shower surrounded by space heaters, I realized I was living in an unhealthy environment.

Now this is a huge jump, I went back to University to become an OT, had a baby, married, moved to Canada, divorced but none of this has to do with Lucy.
Got cancer and the lady watching my dog had her put down, and in despair I found my Muse. Getting warmer but still no Lucy.
Then I heard about Bob and Lucy, and I found my job.
I was Lucy’s friend and her voice.
It took me a long time to hone all my skills, acquire a few new ones, and with new wisdom I figured it out.
I was a force to be dealt with, I was taking back my power. 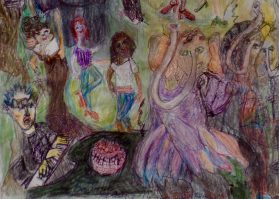 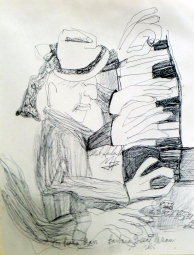